Day 162: Putting the pieces together

***Okay clearly it's been over 3 weeks since I finished and all I've done is twiddle my thumbs and forget about this whole blogging thing. But the thing is I always got frustrated when I found a blog that just sort of petered out with no conclusion so I'm sure I'm forgetting things and it's a bit disjointed but I'll do my best remembering my last week on trail and attempt some kind of catch all gear etc rambling. ***

We take a day off in East Glacier to figure out our next step. Permits are required in the National Park and then we have to figure out official things like airline tickets and how and when this thing is actually ending, so it's decision making time.

It's nice to make plans but I can't even count the number of times people have told me the CDT is all about being flexible. Miles, routes and trail all tend to be gray areas out here. Take the starting and end points of the CDT, officially there are actually 3 different start points and 2 end points. For ending the more popular choice for Northbounders is a place called Waterton Park which sends you through Glacier via the Highline Trail and requires you to walk about 4 miles into Canada (similar to the end point of the PCT and walking to Manning Park). The other option is Chief Mountain, also known as Belly River. This one spits you out on a road right at the Chief Mountain border patrol station and has the added plus of not requiring a passport because you don't pop out on the Canadian Side. This route is where most southbounders have to start due to high snow in the early season.

I of course have always seen picturesque scenes of Waterton lake and it's obelisk, and heard about the epic views on the Highline Trail through Glacier which sounded pretty darn gorgeous. However I also took my damn time this season and am finding myself at the border awfully late which throws a bit of a wrench in my plans. Back in Helena the first week of October sounded ages away when I accepted a new job, big surprise it crept up pretty quick and I actually have a much tighter deadline now. Then let's add in that Rest Stop decided he didn't much care where he finished this being his second thruhike of the CDT and all and he didn't renew his passport. So now I'm faced with a decision, one that I've been struggling with for awhile now.

Do I hike the last week of this trail alone ending in Waterton just so I can see a day or two more of the high country ending solo for a photo op in a place I decided was the more official end point, or do I finish up the hike with the person I've spent the last 3 months hiking with, still physically walking my silly continuous footsteps to Canada and still ending at an official terminus?

This shouldn't have been a big deal at all but out here I spend a ridiculous amount of time stuck in my own head and it slowly morphed into an epic decision. But really these trails are about the experience and the people, and while it is of course cheesy how many times do people say it's the journey not the destination.

I try to stop obsessing and we cobble together a route through the park using the assigned campsites and finishing up at Chief Mountain. I chat over the phone with the Rangers who nonchalantly mention that certain things are closed including the actual border crossing at chief mountain (so no hitching, taxi time) and the ptarmigan tunnel and oh yeah the government might shut down tomorrow. Plus one of the sites we wanted on Reynolds Creek is actually still part of a fire closure and won't be open until next season. Our plan won't work at all so it was back to maps and calculators and after more stress (only on my part of course) and more phone calls we have an approved itinerary and an end date at Chief Mountain on 10/5.

The ranger stations are mostly all shut down for the season and normally we would have to hitch into the park to Many Glacier but these folks are awesome to CDT hikers and tell us where the local office is and let us walk the few blocks to pick up our permit and watch our required park safety video. I guess a benefit of being here in the off season. The rangers are awesome and we chat and learn about bear safety and park requirements. Plus permits are free because we will officially be entering the park in October, the off season I guess, which is cool. They say the shutdown isn't likely but try to check the news. Umm ok? And off we go. It's our last stretch and it feels utterly surreal. 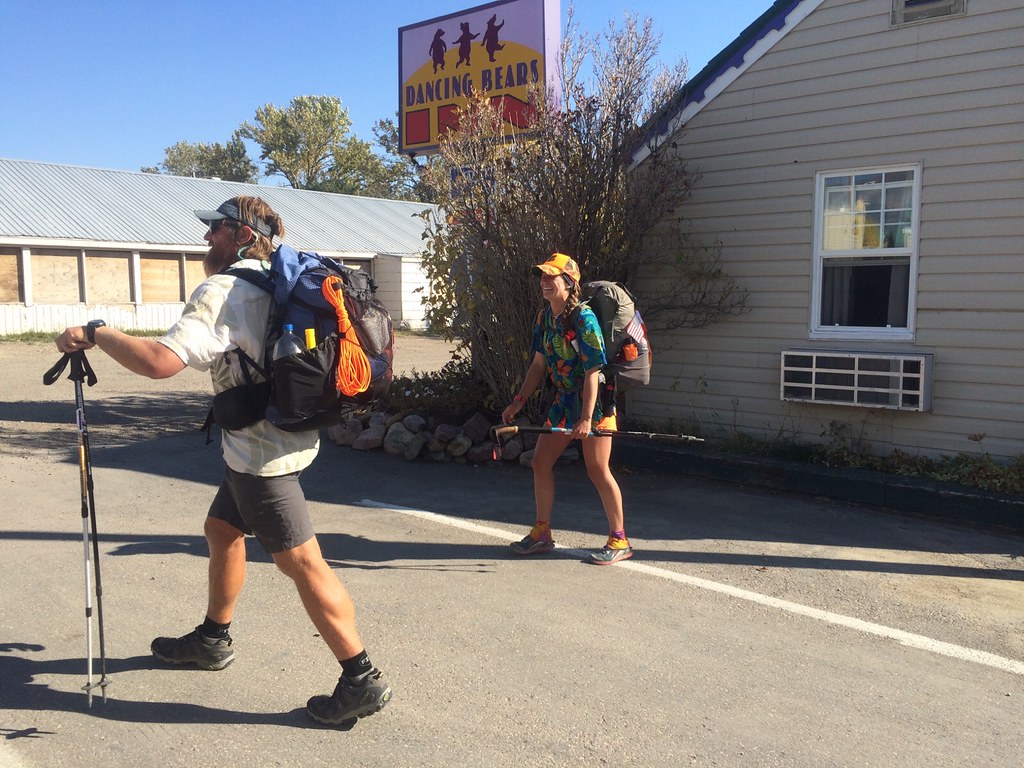 Squarl and Holly head out today, we'll leave in the morning which I think makes us the last Northbounders this season.

- Posted using BlogPress from my iPhone